Is your IT system slow? How to move to a higher gear 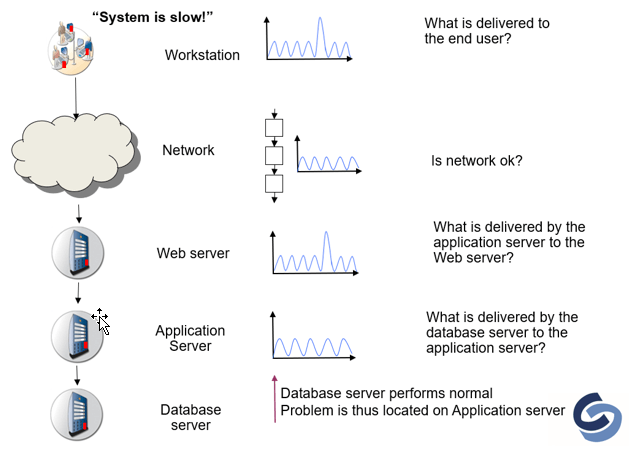 In step with companies becoming ever more digital, slow networks and bad hardware are the cause of an increasing part of the problem.

However, when an employee or user calls in because ‘the system’ is slow, it is not always easy to localize the problem. In this article, we have therefore made a list of the places where the problems most often occur.

But first, let’s take a look at when an IT system is too slow.

When is the system too slow?

To be able to answer whether your system is too slow, there are some rules of thumb to use as basis. We look at how long it may take from when an inquiry is made until the user receives a reply. From click to action.

The waiting time tolerance varies depending on the type of inquiry. That is what the user needs:

It doesn’t sound like much, and it kind of isn’t. By way of comparison, 100 milliseconds are more or less equivalent to the time it takes to blink.

However, the measurements should be seen in a wider context. For example, the opening of a network drive requires anything from 10 to 100 or more inquiries over the network – one single user action will therefore have to wait somewhat longer than the values measured.

Find the roof of the speed issues

If you experience a waiting time that is too long, there may be many explanations. Some of the speed bumps might be in your internal IT system. Other bumps may be with the IT providers if you use an external server hosting.

The figure shows a typical IT infrastructure at a company with 200-1000 employees. We are looking at situations where a user contacts support and says that the system is slow. The troubleshooting can then begin.

In the example above, the issue is with the application server. However, it might as well have been with one of the other steps.

Let’s take a look at the issues that are often internally with the company, meaning the first two steps in the figure.

Typical causes of speed issues placed with your company

In the internal IT infrastructure, long waiting times are often linked to hardware that is old or that hasn’t been updated. Other times, it is simply a matter of the users having too many things running at the same time.

‘We sometimes see a user using Outlook, a CRM system, 15 browser windows and four other programmes at the same time. Many programmes synchronise continuously and are therefore always in contact with one or more servers. That takes power from the machine. You therefore risk that either the CPU or your RAM cannot keep up,’ says Arne Skovhaug, head of Business Development at CapaSystems.

To avoid waiting times for your employees or users, you should be in control of the following. Let’s start close to the employee:

If we take a look at the network cards, issues might occur if you think you have a 1 gbps card but the card has been configured to run at max. 100 mbps.

Let’s move away from the computer and on to your Wi-Fi:

If the issue has not been solved after you have checked your internal IT infrastructure, it’s time to take a look at your external providers.

Typical causes of waiting time placed with the IT provider

It is often more difficult to get a general idea of IT issues that are placed with your providers. However, there are a number of questions to ask your IT provider to find the cause of the waiting time.

For example, ask your provider these questions:

By having these questions answered, you can localise the place of the issue in the IT infrastructure beyond your company. By way of comparison, you can set up a best-case scenario:

By watching closely how the users use the IT systems, you can stop the issues and minimise the users’ waiting time already before they contact you.

With a good understanding and the proper action, you can help your company save lots of money in lost work.